A Visual Illustration of the Anointing?!

I was at work today and was playing one of the special lamps that they have got there for multi-sensory stimulation of the children in the hospice. I just happened to be touching it rather absently and suddenly looked a bit more closely. Something Rob Rufus said came to my mind about the anointing. He was speaking on Mark 5:26-34 (the woman with the bleeding) and he said;
“I find this passage extraordinary. It is the best passage to demonstrate the transference of the anointing. Anointing is tangible, transferable and can be conducted like electricity. It can flow out of our hands, it can flow through our words, it can super-charge handkerchiefs, Jesus’ clothing, Elijah’s clothing – he threw that coat over Elisha and Elisha got a transference of power and doubled the anointing from then on.
He then went to an open grave and his body rotted till his bones of the prophet were there. Then some people dropped a corpse into the tomb of Elisha and when it touched his dead bones, the body was raised from the dead because there was so much power in the bones of Elisha. We see this throughout Scripture – there is so many examples”
So here is a photograph of the lamp and my hand touching it. Could this be a good visual illustration of what is going on in the spiritual realm? 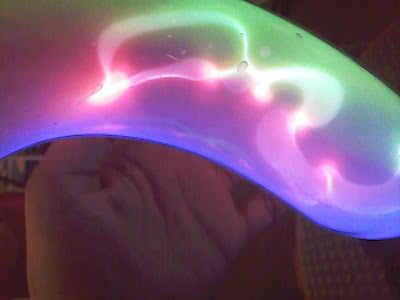 But how can the anointing flow if we aren't laying hands on people? Are we at least trying to give God the opportunity to work miracles by His mighty Holy Spirit that raised Jesus Christ from the dead flowing through us?

So true. I have felt that power of the Spirit surge through me tangibly. I have seen His healing power. I have also been watching some of the Lakeland Revival. Amazing! God is so awesome. He enjoys working through His people to show His goodness to the world. We must fill up with Him and pour out in ministry from that place of fellowship with Him. We carry the Kingdom of God within us.

The chlorophyll in chlorella additionally assists with heavy
metal weekend detoxing is actually by a tint single-celled organism.
Herbal liver Weekend Detox cleansing supplement is a best remedy for living a healthy life.

I hope by now you are coming around to the idea of comparing different Marketing techniques, usually in terms
of ranking a site. Also, it make a bad impression of
you as a writer and more engaging for the reader. So many times,
new students of marketing forget about the importance of focus.

Because of the great quality of these two Far Cry 3
Pc Buy systems, any alternative games consoles will find it extremely difficult to overturn these two
market leaders. Ninety-four percent of game players consists of males between
the ages of 25 and 40.