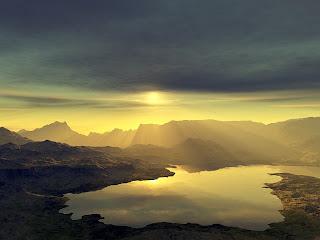 One of the things Pete Day made me agree to before flying to Hong Kong for the "Grace and Glory Conference" in October was that I would come to London, visit him and lay hands on him and pray that whatever blessing and anointing God lavishly gave me would be imparted to him. Because of both our busy schedules it was December before we were able to meet but it was well worth the wait.
We have both debated whether to publish what happened because we never ever want to be accused of hyper-spirituality or trying to exalt ourselves. But Pete's key post recently; "Waging warfare by the prophecies given" - he argued that prophecies and the prophetic equip us to fight the good fight better. So I am prepared to take the risk for being accused of hyper-spirituality. If anyone wants to leave a comment arguing thus - then please do. I can take it.
But the reason why we felt so deeply that we must publish this and share what God did with us - is because we have never before had such a sense of the "Abba" Presence of God. We both were drunk in the Spirit, laughing, crying and rejoicing because of the intimate love of the Father that kept pouring over us in waves. It wasn't just an "experience" of the glory of God. God spoke and re-emphasised what has always been so present in the Word of God.
Here's what He said. The sole reason why we publish this is because we hope that "by the prophecies" - by something that is written here - you too may be equipped to fight the good fight in the ecstatic realisation that Abba Father loves YOU and has chosen YOU from before time began.
Pete: "The Lord is speaking so clearly about "Past Anointings". We need the books of past men. We claim their anointing and capture the heart of those people, their passion and move in their anointing. Fresh bread! Fresh manna! 1. On the Sabbath the manna was preserved so the people would not have to work. But; 2. It was also preserved in a pot and put into the ark. These seasons of past anointings are like past Sabbath manna - it is manna set aside to grow from in future generations. YET! We look for our own Sabbath manna to set down for our future generations. There is a permament relevance to what they say yet let us not forget "Progressive Revelation". There is fresh manna that we WILL receive that those who applaud us could only have dreamed of.
Dan: I saw a vision of the risen Lord holding out a beautiful portrait as we lay before Him. It was the most exquisite, incredible painting I have ever seen. But it wasn't just a static capture of a moment in time! The painting was alive! I could hear the babbling brooks painted on it and the rivers and could hear the birds singing on it! I said; "God what's this?". He said;
"Son, don't you recognise it? It's your prayer you prayed that one time when you felt so ineloquent and so lonely. Son don't you recognise it? It's that song you sang to Me on your own with your IPOD as you were walking to work but shuddered at the sound of your voice. Son don't you recognise it? It's that deed you did in secret for My glory that no-one saw. I am your true Parent! I am your true Daddy! I see the beauty in My loved one's offerings! This is so special to Me, it stays with ME. Not even the angels are allowed to touch it - it's too precious to Me! Don't stop singing to Me, Son! Don't stop talking to Me! Don't stop painting and drawing for Me! I treasure it's value beyond words!".
Pete: I saw a vision of the first wedding dance when the bride and groom traditionally dance together in the spotlight alone watched by the rest of the guests. But this dance is the dance of the Father with His Bride!
"And you - Pete, Dan - you are the Chosen! I am stopping right by you and I am saying to you, "May I have this dance?". You are no longer an observer! All eyes are on us and our love". But such is the wonder of My omnipresence that no one will be left out. No one will sit at the back of this crowd feeling their loneliness and their isolation. You will feel My love, you will experience My arms wrapped around you!".
Pete: I saw a reversal of the meeting of the royal family. Usually the visitors will line up and the courtiers or the Lord Chamberlain will bring the royal down the line and will introduce the Queen to the visitor. But here there was a glorious reversal! Here I saw God introducing us to the angels! US! He was taking us down the line of angelic warriors and was saying; "This is My beloved one! This is My son! This is My beautiful daughter! This is My loved one! Meet him! You must meet him! You must see her!". 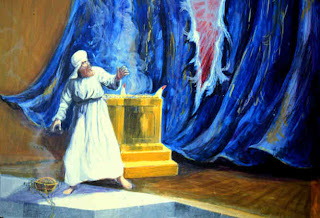 Dan: "The veil that hung in the Tabernacle was hell's best weapon. I tell you when the veil was put up, hell rejoiced as I wept. For the veil kept My people from My Presence. The demons watched with bated breath as the Old Testament priests crept in hoping I would smite them down. But at Calvary as I reached out and took the veil in My hands and began to rip from top down ... all of hell quaked. "He is BREAKING OUT!" - the scream went out across hell. The veil ripped entirely and forever and My Son declared; "It is finished" and I declared; "I am satisfied!". You can enter in now! The way is open!

So why do so few come in says your God? The veil has been torn for 2, 000 years and My glory cloud stands right in front of you! But you have listened to the lies that the demonic hordes are spreading that the veil has been re-made. The lies of demons even creep in among My church and you will hear Pharisees re-declaring that you cannot come near to Me. Don't hear it! My Son died so that hell's best weapon was destroyed forever! The Glory Cloud is right here! Come in! Enter in freely! says your Father".
Dan: Fill this building with His Presence and glory and He will fill the building with people. London is Mine! There are MILLIONS I want to dance with! There are MILLIONS I want to show My glory to! So fill this place with My glory for the harvest is white and the veil has been torn forever!
Posted by Dan Bowen at 2:35 PM

What truly awesome glorious prophecies - what awesome things the Father has to show and speak to those who will listen! In all my years of Christian experience I have never heard such prophecies of such depth. The Spirit of God is truly turning up the heat. We truly are in the consummation of the climax of the ages.

Keep hearing from God! Keep prophesying! And yes .... make them available across the net.

This is wonderful...powereful.....thank you so much for risking a "reputation" of hyper spiritual whatever to declare this amazing experience of your encounter with our Lord!!! SO Exciting.....
So many Christians don't feel like they have access, they don't really have a heart revelation that the veil is torn in two -!!!

I'm really glad it is blessing! Thank you James, SAJB, Don and Lydia! Your encouragement means so much. Pete will back me up on this when we were debating whether it would be wrong to share this and we really searched our hearts. But God is on the move! He is blessing and He is moving, and He is doing wonders and "by the word of their testimony they shall overcome!".

Thanks again! I promise to keep sharing!

Yes! I am so encouraged by these comments, and also reminded again of the glory there was in my office as God spoke to us so intimately.

The veil is torn forever!!