Gifts of the Spirit by David Mansell

From the Restoration Magazine - January/February 1977
The term 'charismatic' has made its presence felt in modern Christian vocabulary and evidently intends to stay. Someone who speaks in tongues finds himself referred to as a "charismatic Christian" and his church will merit the label "charismatic" if they permit and practice the gifts of the Spirit mentioned in 1 Corinthians 12:7-11. 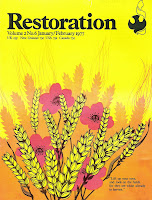 Would you think me critical if I said that many charismatics need to become charismatic (using the word in this popular sense)? The church at Corinth knew of the existence of spiritual gifts and manifest them in their meetings. Yet to this church Paul had reason to write; "Now concerning spiritual gifts brethren, I do ot want you to be unaware" (1 Corinthians 12:1). He set out in chapters 12 to 14 to shew those who possessed God's means, how to achieve God's goals.

Most of the members of the church at Corinth had "moved in the spirit" before coming to a knowledge of the Lord Jesus. Even today prophecy, visions, tongues and revelations operate in pagan temples as well as Christian congregations. How then can we distinguish between demonic spirits operating behind the facade of dumb idols and the Spirit of the living God? The first lesson we need to learn is how to avoid deception. As in all His ways, God makes it so simple that even a child need not remain "unaware".
Trying the Spirits.
Paul offers two tests which will infallibly reveal the source of any spiritual manifestation. The first relates to the manner in which a person operates the gift and the second deals with the place given to the Lord Jesus. "You were led astray ... however you were led" (1 Cor 2:2). Paul selected words to convey the sense of men being carried away by an irresistable force.
Man has always sought supernatural experiences because God created him a spiritual being.
When the Corinthians had previously opened themselves to that unholy spiritual realm they had felt themselves taken over without their own personal cooperation much in the same way that those who mind bending drugs are taken on a "trip".
In contrast, the Holy Spirit does not take us over in some semi-hypnotic passivity. "The spirits of the prophets are subject to the prophets" (1 Corinthians 14:32). 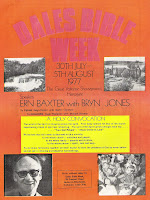 The one who speaks in the power of the Holy Spirit has full control of himself and can hold the revelation he has received until the previous speaker has concluded his contribution.
Whereas the Holy Spirit upbuilds men in their union with Christ, lying spirits aim only to destroy. God is not looking for open minds into which He can drop a prophecy here or a word of knowledge there. He speaks His word into the herats of those who walk with Him. "The secret of the Lord is with those that fear Him" (Psalm 25:14). When that "secret" is openly prophesied, the personal conviction of the spokesman will accompany it's delivery. "Now just relax and speak out whatever comes into your mind". Such advice suits the sceance better. If you follow such counsel in order to receive a prophecy, the consequent utterance will almost certainly be the product of your vivid imagination rather than a revelation of God.
"No-one can say "Jesus is Lord" except by the Holy Spirit" (1 Corinthians 12:3). Of course anyone may mouth those words without in fact worshipping Jesus and submitting to His lordship.
We cannot test a prophet merely by the correctness of his confession but by the attitude of his heart. No man can say in loving, willing worship, "Lord Jesus!" and his utterances inspire in the hearts of his hearers the assurance that Jesus is Lord.
"The testimony of Jesus is the spirit (that motivates) prophecy" not merely it's subject matter. On the day of Pentecost Peter announced "Jesus having been exalted to the right hand of God ... has poured forth this which you both see and hear" (Acts 2:33).
The gifts of the Spirit demonstrate on earth Jesus' enthronement in heaven. Jesus rules by sending forth the word of prophecy to declare and accomplish His will here on earth. He rules in situations of confusion by giving words of knowledge and wisdom and discerning of spirits. He rules over sickness by gifts of healing. He rules over apathy by faith and miracles. He rules over our present mortal limitations by enabling us to pray and worship supernaturally in tongues and interpretations. Our God reigns!
He does not try to prove it by these gifts. Rather He gets on with the task of reigning in and through His churchby means of these manifestations.
Let us then work together with God to establish His Kingdom.
If his heart does not beat in response to the enthronement of Jesus Christ, the charismatic will find that he has lost his charisma.
Posted by Dan Bowen at 11:37 PM

The article may be old, but the truth is still fresh.