Prophecy of a Rainbow from Hong Kong!

I'm just listening to an awesome message that Rob Rufus made reference to at "TOAM 07" and at CCK the Sunday before when angels came down and manifested themselves in their church. That in and of itself was absolutely awesome enough but Rob made reference to a prophecy that came during the worship. 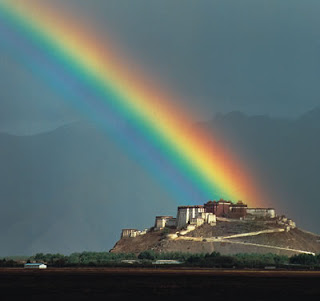 "A Rainbow means that judgement is over!".
I have always "known" that because I grew up in a Word church. But I don't think I ever really "knew" it. Rob said that the prophecy made reference to the rainbow circling the throne and that truth just sank into me. Judgement is over! Peace is made! I must be honest - Terry Virgo's last session at TOAM 07 didn't really bless me very much. I found it quite odd being in the overflow session with the corresponding sound issues and was struggling that the conference was coming to an end so my overwhelming impression from that message was Terry pointing at the screen (and what seemed like me) saying "You stupid man".
Please don't misunderstand me. I know Terry and I know why he preached what he did. I'm just being honest - that's how I reacted to the sermon then. I'm going to listen to it again sometime and I am sure that in the context of grace that Terry preaches, I will benefit from the message but the enemy did a hatchet job on me and plunged me into doom and condemnation.
This prophecy is like a Patriot missile to totally wreck that.
"A Rainbow means Judgement is over! And a Rainbow circles the throne! Bold I approach the eternal throne and claim the crown! Hallelujah! God doesn't look at me and say "You stupid man" - He looks at me and says "My beloved son!".
Posted by Dan Bowen at 11:42 PM

Great post. Thanks for your honesty. I think we all need to get to the place where we don't receive anything and everything just because it's coming from someone we look up to. They're human too! And we have the same Spirit, there is no 'higher up' in God's kingdom. The more I see this , the less I am hurt or confused by seeing so-called great men of God make a mistake. Not saying Terry made one or not, I don't know anything about his message. But the truth is, we should only take from preaching what God gives us. It's so good to hear you battled the enemy here and came out clearly on top! Predictable though hehe.

That's sad that you had to finish the conference feeling under a cloud of condemnation. Isn't it amazing how swiftly the enemy moves in - even in the midst of such glory and the Presence of the Spirit. I am positive Terry didn't want anyone to be struggling as a result of his message. I think you could see the tension on his face as he prepared to deliver it. But Jul is absolutely right. We don't come to men but to the living God. We feel His pleasure upon our lives and look to the EMPTY Cross and EMPTY tomb and rejoice that the debt has been paid! God the just is satisfied to look on Him and pardon us!! So glad that rainbow word lifted your spirits!

I must confess while maybe I didn't struggle as much as you obviously did, I was incredibly graateful to Kate Simmonds who swiftly came after the message with that song "There's no condemnation". Thank God for that truth!!

yere musta admit it was a weird sermon to close the conference on. it woulda made more sense to be the other way round so that we could have had the context of the conference to deal with issues int he Presence of the spirit. but he's terry i guess and he does wat he wants

That's really odd. I know I wasn't there or didn't hear it but for terry to say "you stupid man" sounds a bit harsh. ARe you going to do your notes on his sermon?

Please don't misunderstand me - I wasn't trying to imply that Terry Virgo was at all walking out of the Spirit or 'doing his own thing'. I have known and watched that man's walk and he is a man of God and I have no doubt that he believed God wanted that message brought then. This post wasn't intended to criticise that at all - you will never NEVER hear me criticise Terry Virgo!!

I was just trying to share how I responded to that message at that time. The sound issues in the overflow meant it wasn't as easy to enter into worship becasue the worship leaders sounded quite quiet and then to have that come on the back of it just was a struggle for me.

I may do the notes from the sermon but as my notebook was pinched, I am having to listen to the sermons again and so I'm prioritising the sermons that really stirred me. I may get to it at some point.

Scotty - the context of him saying "You stupid man" wasn't harsh at all. He was actually saying it in a really broken hearted loving way. I think. But again as I was finding it tough, that's what stuck with me.