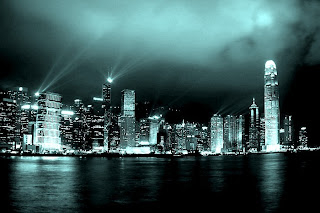 "For 3 months the screams of God got louder and louder and louder and louder until it dawned on me that God has prefixed the end! Now He is saying "Come to Hong Kong because I have prefixed great victory for you!". After 4 years I am staggered at the blessing and success and fruitfulness and influence of this church.
This is but a small part of what God showed me in those 3 months of what He had prefixed for us and the people He said He would call around us and I am seeing those people in this meeting right now and thousands who are not here yet and I am seeing impact into the politics and media of Hong Kong and I am seeing a base of thousands of people and I am seeing a move of the Spirit in Hong Kong that will touch the entire world - I am seeing multitudes come to Hong Kong to see what's happening in City Church International - I am seeing impact on Beijing and China and pulled into my future by a vision - a kaleo - a scream - a call that has been prefixed!
I am not just called to lead a church - I am called to empower people to change the politics of nations, to change the education system and get wrong teaching out of the education systems. I am called to affect orphans and those who are hungry and not clothed and the broken and the disenfranchised. We are called to bring the misery that is on earth out of the way and the Kingdom of God in. We are called to relieve epidemic poverty, we are called to cure people from AIDS, we are called to bring justice to nations and are called to trumpet that and sound that! Though I may not do many of those things personally - I am called to sound a prophetic trumpet that awakens the scream of God in people's tummies so they will get rid of the silly trivia and the silly things that distract us".
Awesome ... hey?
Posted by Dan Bowen at 1:47 AM