Your Daughters Shall Prophesy!!

I came home from work today to read an incredible email from Pete just before he left for the "Life in the Spirit Conference" where Sam Storm is ministering. I had sent him my iPOD in the post so that he can enjoy Rob Rufus on MP3 while he is at the conference and just as I was posting the parcel, for some reason I wrote; "FIRE!!" on the back of it. Don't know why! Maybe to freak out the postman - maybe I hoped Pete would be laid out in the Spirit when he got it. But in his email he wrote this; 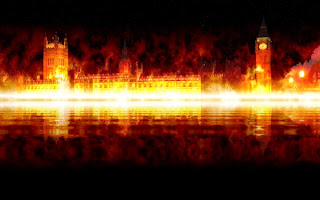 Ruth asked me today "why did Dan put FIRE on the back of his parcel." I explained about the fire of the Spirit. Then she started making up a song using the words of "London's Burning". It is quite prophetic;
"London's burning, London's burning, fetch the people, fetch the people. FIRE, FIRE, FIRE, FIRE,DON'T pour on water, DON'T pour on water."
There is a fire to come in London.
Pete's daughter is only a child! Yet I was absolutely staggered at the prophetic edge to what she wrote. I don't know whether she was aware of it or not but Joel's prophecy says clearly; "Your sons and daughters shall prophesy". The Church either is disobeying the command; "He who hath an ear to hear ... let him hear what the Spirit is saying to the churches". So is it any surprise that children are beginning to speak forth what the Holy Spirit has on His heart?! And it is clear - London SHALL and MUST be filled with the glory of God as the waters cover the sea!
Why? Because first and foremost God promised it! And secondly London is the first domino to fall - when London comes under the cloud of glory, surely the United Kingdom cannot be unaffected. When I was at the "Grace and Glory" conference in Hong Kong, I heard again and again God speaking; "London is Mine!".
Posted by Dan Bowen at 8:31 PM

That's so cool! I agree about our kids ....
My five year old has been talking about God's power alot lately. Last night he came down from his bed, and said, "Mommy, God keeps making me laugh and tickle myself and do silly things with His power!"
Can this child already be sensitive the Holy Spirit???
I think it's very awesome!

Wow Lydia that is wonderful to hear! I most certainly think that this child can be sensative to the Holy Spirit!! I love that so much; "God keeps making me laugh and tickle myself and do silly things with His power!". I'm sure evangelicals would sniff at that and say; "What's the point?". But HOW can a five year old make stuff like that up?!

I think the responsibility is heavily on parents to build an environment where that sensitivity is warmly welcomed and not quenched. Then surely our children will grow up with that sensitivity growing and maturing - and potentially grow into powerful prophets of God.

Surely then such children will have a major headstart on people like myself who is trying to learn about the encounters with God and the glory of God when I am 30 and trying to lose all my legalistic baggage of my early Christian life!

Sounds like Ruth has a gift of prophecy that is gonna grow and burst forth! Awesome!
Nick