Revival For a Mission!!

As I understand church history much of the charismatic movement came under fire for promoting an introspective theology that the baptism of the Holy Spirit was a personal experience for a personal encounter with a personal God. That's partly true - but everything within me - my heroes such as Ern Baxter and Rob Rufus and Terry Virgo all argue that there is more to it than that. I was tremendously encouraged recently in reading a book called "Revive Us Again!" - this was a book published by Harvestime and edited by David Matthew with contributions from Bryn and Keri Jones, Terry Virgo, Arthur Wallis and David Mansell. It was David Mansell's chapter that thrilled me the most - in the chapter he presented a wonderful portrait of the Kingdom of God.
The book is out of print sadly - so here is the chapter reproduced; 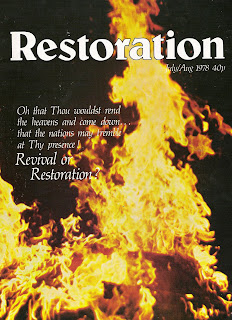 "A radical goal for radical Christians" by David Mansell