"Face to Face Intimacy with God" by Rob Rufus 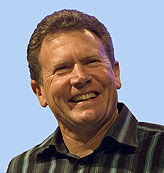 Listening to this today - it's as sweet as ice cream to my spirit!

I love listening to Rob Rufus preaching the word of God, it's been a real revelation to me. But comments like this make me feel uneasy:


"All the righteous anger of God's wrath was finished and poured out on Jesus Christ at the Cross. There is no anger left in God. If we say that God has got a bit of anger left then we are saying that Jesus' death on the Cross was no sufficient and we are blaspheming His sacrifice."


This sounds like Universalism (all will be saved), surely he can't mean that God is not angry at unbelievers? Surely he means that for Christians there is no anger - right?