Rob Rufus mentioned the name "Heidi Baker" during one of his sermons and when Rob Rufus mentions someone I am learning to to take notice! Rolland and Heidi Baker are missionaries who run Iris Ministries. Their lives were changed after meeting Jackie Pullinger in Hong Kong - they then went and began to work among the poor. But their ministry was not and is not simply social action. Their ministry has been characterised consistently by the power of God. Their website states; 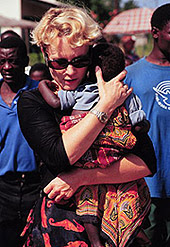 "Today Rolland and Heidi cry out for a continuation of the visitation of God experienced by the children of H.A. Baker's orphanage in China long ago. That is beginning to happen, and more testimonies are accummulating than can be communicated! May the Word of God spread in power to the remote corners of the world, and may the the poor, the crippled, the lame and the blind, people who have never before tasted the goodness of God, be drawn the King's great banquet!"

Rolland and Heidi Baker's ministry covers 5,000 churches all over Mozambique and into neighboring countries. They care for over 2, 000 children in their orphanages and He is revealing Himself to the children in dreams, trances and visions like I have never dreamt of before. I went into CLC in Birmingham and found a book by their grandfather H A Baker called "Visions Beyond the Veil". I read it on the bus and it affected me profoundly. Baker writes of his work in an orphanage in China and how God powerfully used the children.

Evangelicals are renowned for immediate cynicism and I am sure this post and the ministry of Rolland and Heidi Baker will be no exception. H A Baker himself was obviously aware of the potential for a cynical reaction to what the children reported. He presented six reasons why there is no natural explanation for the experiences of these children;

1. These wonders could not possibly have been the product of the children's natural minds.

2. These spiritual experiences, visions and revelations could not have been the working of the subconcious mind.

3. They cannot be explained by the psychology of mental suggestion from others. We ourselves had never seen such visions, never been in meetings where they had occured and never even read or heard of visions like the ones that were given to these children.

4. They did not get these things from one another.

5. There is no natural explanation for the fact that the content of the visions was in complete harmony and had numerous detail in content.

6. Neither can these experiences be explained as any sort of mental excitement, religious frenzy, natural emotion, nervous state nor any sort of self-produced condition. The Holy Spirit came in power upon normal children in a normal state of mind free from all the conditions just mentioned.

H A Baker is as unapologetic in his expectation for a reviving of the supernatural as is Rob Rufus. He writes;

I want to deeply recommend the book. It is extremely short and only took me half an hour to read but the power invested in it exceeds many, many other books that are much longer. The one account I want to draw attention to is an absolutely awe-inspiring prophecy that a young Chinese beggar brought. H A Baker writes;

"This boy had been a beggar ... He had arrived at our doorstep in rags and filthy - in fact with more dirt than clothes ... One night there was an unusually strong sense of the Lord's Presence and heaven seemed very near. The boy I have just spoken about seemed to leave the earth and be caught up into heaven. Ushered into the Presence of the Lord Jesus he fell flat on his face before Him in humble adoration and worship ... the boy sobbed and wept with the deepest grief as the message was given to him; he spoke in a clear strong voice, speaking a sentence or two at a time.

The intonation of the voice, the choice of language, the penetrating power of every word was such that no one who heard it could have doubted that he was speaking by direct supernatural inspiration from God ... the boy said;

"I weep tonight. I am heartbroken. I am in deep sorrow because there are so few people who believe in Me. I planned and prepared heaven for everyone and made room for all the people in the world. I made the New Jerusalem in three enormous cities, one above the other, with plenty of space for all. But they will not believe Me. Those who believe are so very few. I am sad, so very sad.

If you have any friends, tell them to repent quickly. Persuade everyone to believe the gospel as soon as possible. But if people will not listen and will not accept your message the responsibility will not be on you.

Receive the baptism in the Holy Spirit. If you will wait and believe I will baptize you. The devil deceives you by making you think that you will not receive the baptism but wait and seek and I will baptize you and give you the power to cast out demons and to heal the sick. Those who receive the anointing of the Holy Spirit are to preach and bear witness and I will be with you to help and protect you in times of danger.

Tell other churches they too should seek the Holy Spirit. All churches must press forward".

There are several ways to respond to these things as you learn about this ministry and learn about what is ACTUALLY happening in the world today. You can be cynical and err on th eside of caution. Or we can allow these truths to fill our hearts with faith and hunger and desperation that God will come and do the same in our lives, in our churches, in our towns, in our cities, in our nations!

If anyone wants to know more and hear more about Heidi Baker - here are two messages by her from You-Tube. She is speaking at Toronto Airport Christian Fellowship. I noticed that the same glorious thread of grace and glory from Rob Rufus comes through her preaching and speaking. Enjoy (as long as your theology allows you to listen to a woman preaching) ... ;)

I have been so impacted by Heidi's pure love for Jesus. I want that intimacy. So often I've been so desperate for Him and not even realized that its OK! Its ok that all I want to do is be in His Presence. Thank you for your support and testimony of her. God Bless You All.

Heidi Baker and the ministry God's done through her, and her deep love for Jesus... has radically transformed my thought life and my expectations of God's glory. The things she is doing are things the Lord has told me I would do, but I had a hard time truly believing it until I saw Heidi Baker walking, living the Word of God, and not just talking.

I've read both her books and H.A. Baker's books - I suggest them all to anyone who desires and intimate and world-changing relationship with Jesus Christ.

Just questioning if eBay allows you to market [url=http://www.ticketchoice.com.au]concert tickets[/url] on-line? Do you know if you will discover any restrictions depending on what country you're in?

My parents have just called me and asked if i could "get rid" of their two tickets to a concert as they wont be able to make it as a result of yet another family event.

Apart from asking friends etc, i thought ebay would be a good place to market them.

But whats ebay's policy on selling tickets? Ive heard alot about it for the news but ive forgotten what happened.

and if it matters, the concert is within this coming month

Thanks ahead of time for the advice.

I am a born-again Christian, and this lady is absolutely crazy. Blathering, endless crazy. People like her make Christians look bad.

What kind of an idiot is she??? No wonder so many people are skeptical of Christianity with idiots like her running around. She does the best service for Satan; giving normal people an excuse to reject the gospel if people like her preach junk like this.

I just read the comments that call Heidi an idiot and a raving lunatic that makes "christians" look bad. That's so exciting to me because that's what they called Jesus. May my heart continue to be changed so that I can see people raised from the dead, food multiplied, blind eyes opened, deaf ears healed, and all of the other miracles that Heidi and Rolland have seen. If that is accompanied by people who don't understand calling names...so be it!

This woman is the real deal. To call her names and belittle her is just a reaction of fear. I have watched her videos and slowly my eyes have been opened. To the two posters who called her names, your attitude and rude name calling shows a lack of Christian felicity. Our Western church is in for an awakening, God loves us and wants to poor Himself out on us...we may yet look this "foolish". Hope so, anyway.
God bless.

To the people who thing she is an idiot, I would rather be an idiot for Jesus then be luke warm. Jesus says, to be either hot or cold for Him.

The bible is true when it declares that "the natural man knows nothing about spiritual things for it is foolishness to him".(My summary of 1 Corinthians 2:14) If these people are really believers they should read in the New Testament the various miracles that happened there and by reading the word they shall have their minds renewed. It is time to get your mind in alignment with what the word of God says. Put off the old self and put on the new. These things are spiritually discerned so you need to grow up spiritually in order to appreciate them. Your worldly thinking is limiting what God can do in and thru your life.

In terms of home fitness centers, you will find loads of choices you may make.

Just about every handle can have up to seven bands
connected to it.

Stop by my page - bowflex dumbbells 552

Numerous athletes and those who practice mixed martial
arts know that advantages of teaching grip strength but couple of people planning
to the health club know anything about it.

Look at my web-site :: click through the next web site

Needless to say, this is actually the cost for that high-end chrome versions.

If you are looking for severe bodyweight reduction, you are much better off buying an electric treadmill.

Feel free to surf to my web site dumbbells for sale

Hello, I would like to subscribe for this web site to get newest
updates, therefore where can i do it please
help.