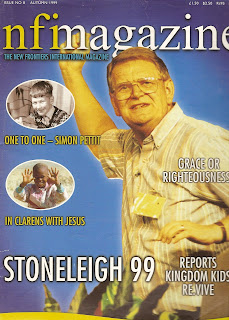 One of the ways in which we can encourage ourselves and stir our faith as believers particularly in a period when God doesn't seem to be doing anything particularly manifest - is to recall the times in the past when He has moved, spoken and acted again and again. I'm struggling quite a bit at the moment with various things so I turned to my old archives of Newfrontiers magazines and happened to come across the Autumn 1999 edition and began reading about what happened at Stoneleigh 1999 - especially the prophecies! Here's what was written (John Kpikpi wrote the report);

"There were many encouraging and stirring prophetic words. David Devenish saw the Lord in gigantic majesty riding into the meetings. He was riding around and enjoying the meeting with His people but He would not come down off His horse because; ' ... I'm gathering up an army. I'm not going to get off the horse. I'm rather gathering my people to mount like warriors on horses behind me; that's what I am going to do all this week'.
Ray Lowe saw God's people with their regular faithful acts of obedience as surfers who paddle hard looking for the big waves. He felt God was saying; 'Look get ready for the big wave. Another big wave is coming. There's another big wave coming'.
I felt God saying the boom time for the UK churches was nearer now than ever before but that He saw the scale of the work He wanted to do in the UK was still not fully appreciated so He wanted to put figures to His promises for His people. 'I dare you to believe Me for 1,000 churches in the UK, many of which will arise as unplanned pregnancies and births'".
In Daniel chapter 2 we come across a vision given to a pagan king with far-reaching implications - stretching across centuries even to us. The king saw a piece of rock - cut out not by human hands, and used to smash a giant statue made up of a strange mixture of materials which simply could not hold together. The rock that was cut out became a huge mountain that filled the whole earth. Are we not part of what is being depicted here as the kingdom of God? Have we not been cut out of the eternal rock - not by human hands - and is our God not using us to smash every man-made religion, authority, rule, power and principality? Are we not growing to replace this strange mixture of faiths and religions which can never stand the test of truth?
But listen: this STONEleigh shall grow and grow and grow and its impact will fill the whole earth!".
I was especially stirred by Ray Lowe's prophecy;
'Look get ready for the big wave. Another big wave is coming. There's another big wave coming'.
It sounds very familiar doesn't it?
"I was woken up this morning about half past four with a really powerful dream. I dreamt that I was kind of hovering about the Brighton coastline and that I saw the image similar to the one in the photo. A tidal wave was speeding across the sea and moving towards Brighton itself".
God is surely on the move! Let us all have faith! Let us fall on our knees and plead with Him to come in power upon our land! Let us not allow the enemy to swamp us with fatalism and defeatism! God will have a beautiful Bride to present! The Church is the hope of the world!
Posted by Dan Bowen at 6:48 PM

I appreciate your blogs, and your effort to fuel the "ongoing charismatic resurgence"

In effort to capture this heart, I have renamed my blog "Resurgence"

You can read it at http://earnestlydesire.blogspot.com

I think the name prophetically speaking, while a fun one for me, failed to communicate what I was trying to do and could have perhaps sounded a little egotistical.

Anyway, I have been inspired by your heart for the gifts of the spirit, and think this new name captures mine better.

It looks a really great site, Jesse, and an excellent title. I look forward to more reading, and to each of our blogs walking in step for the charismatic resurgence.

Agreed! An awesome title and I think one that really captures the spiritual atmosphere at the moment. Pete and I have just both returned from the wonderful Brighton conference and the prophets there are unanimous - a new day is at hand! God is doing something new and it is so exciting to be alive! It is wonderful to walk in unity with you - knowing our hearts all beat as one - a passion for more of the awesome Presence of God in our lives, and our churches!!